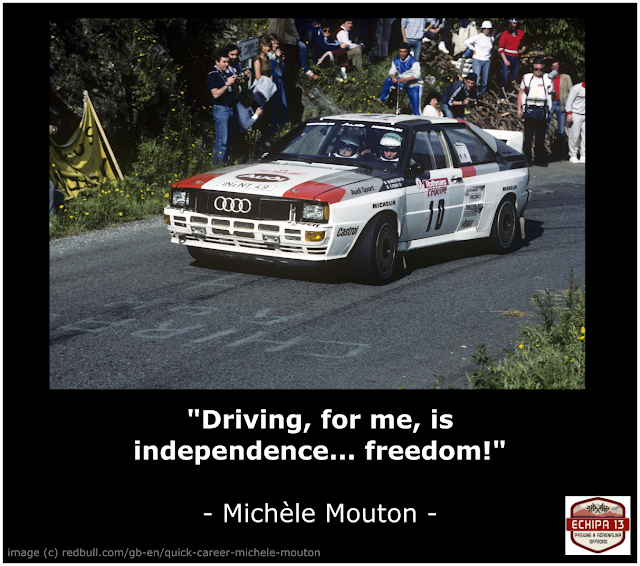 Dedicated to all women out there, but especially to those involved in motorsport.
Ladies, be free, be independent!
And enjoy the best things in life - to the max!

Michèle Mouton (born 23 June 1951) is a French former rally driver. Competing in the World Rally Championship for the Audi factory team, she took four victories and finished runner-up in the drivers' world championship in 1982. She is still the last woman to compete in top-level rallying.
Mouton debuted in rallying as a co-driver but quickly moved to the driver's seat, steering an Alpine-Renault A110 in national rallies. In 1975, she competed in circuit racing and won the two-litre prototype class in the 24 Hours of Le Mans. After being signed by Fiat France for 1977, Mouton finished runner-up to Bernard Darniche in the European Rally Championship. She went on to win the 1978 Tour de France Automobile and record consistent results in her home events in the WRC; the Tour de Corse and the Monte Carlo Rally. For 1981, Audi Sport signed Mouton to partner Hannu Mikkola. In her first year with the Audi Quattro, she took a surprise victory at the Rallye Sanremo.
In the 1982 World Rally season, Mouton finished a close second overall to Walter Röhrl, after wins in Portugal, Brazil and Greece, and helped Audi to its first manufacturers' title. Her campaign the following year resulted in fifth place. With the team having four top drivers for 1984, Mouton's participation on world championship level became part-time. In 1985, she won the Pikes Peak International Hill Climb in the United States, setting a record time in the process. In 1986, she moved to Peugeot and won the German Rally Championship as the first female driver to win a major championship in rallying. Soon after securing the title, Mouton retired from rallying due to the ban of Group B supercars. In 1988, she co-founded the international motorsport event Race of Champions in memory of her former rival Henri Toivonen. Mouton became the first president of the FIA's Women & Motor Sport Commission in 2010 and the FIA's manager in the World Rally Championship in 2011. 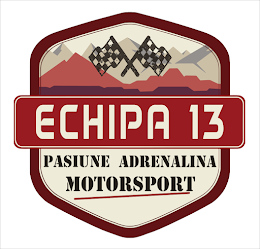